HOW TO OPERATE A ROCK-BREAKER ON A MINI EXCAVATOR

If you’re removing the concrete from a driveway, removing rocks from a landscape or carrying out some other general demolition work, hiring one of our rock breakers to attach to the mini excavator will save you loads of time. You could use a manual jackhammer, which we have available for hire as well, but you may as well save time and energy.

Let’s walk through how to operate the rock breaker on the front of a mini excavator:

Always make sure the rock breaker is laying with the hoses facing upwards. This prevents the hoses from getting damaged.

Pick up the rock-breaker with the hook on the hitch and carefully tilt the hitch back. Push the right joystick to the left, to tilt the hitch backwards and the quick-hitch should lock everything in place safely. If it doesn’t, you’ll just need to release the spring hitch with the little rod that belongs inside it. Once the breaker is in place, put the safety pin back in the hitch.

Prior to attaching the hoses, it is important to release the pressure in the hoses. If you don’t, it can be hard to connect due to the fittings on the machine end being so full of oil. It can also cause damage to the seal inside the hose fittings, rendering the mini excavator unfit for use due to all the hydraulic oil leaking out.

It is also very important to make sure that the hydraulic connections on both the auger end and the mini excavator end are cleaned off thoroughly with a rag. This will prevent any dirt or rubbish interfering with the hose seals. If dirt does get in there, it can cause the hoses to leak and ultimately the machine to malfunction. Replacing these fittings is also very expensive. 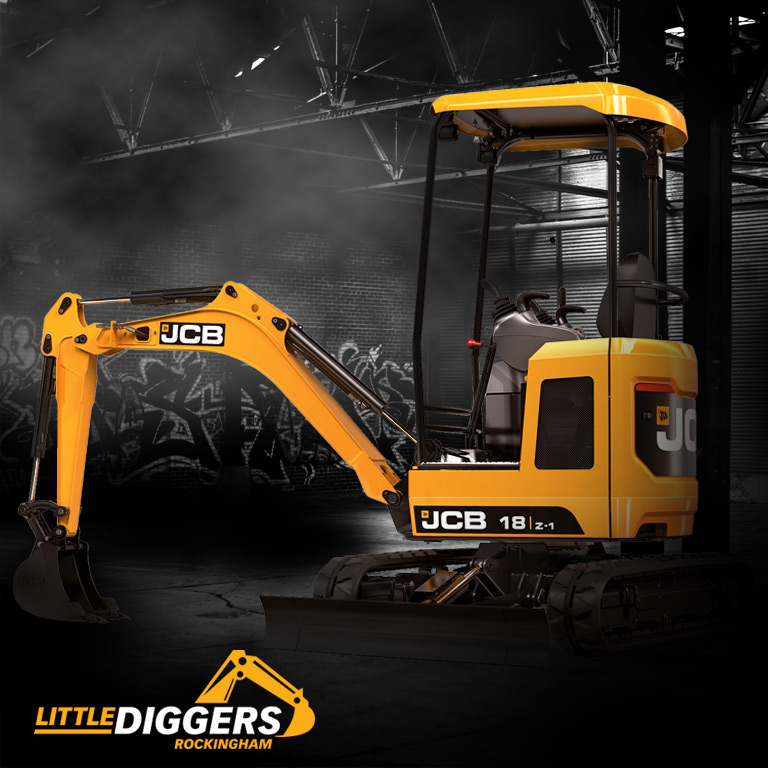 How To Operate A Mini Excavator

Do you have a tight access earthmoving job? If so, often times you will need an excavator or a bobcat nimble enough to fit down the side gate, yet robust enough to get the job done efficiently. This is where Little Diggers steps in. All of our machines are designed specifically for, but not limited to these types of projects. Our machines tackle the big jobs, too.

You may need a mini-excavator to do things such as dig a trench, load soil onto one of our tipper trailers for hire, rip up old garden beds, dig a soak well or dig footings. It’s all made easy by Little Diggers

You may also find that you need a rock breaker smash up concrete, an auger to dig post holes or a limestone block-lifter to help build a retaining wall. We supply all of this equipment at some of the cheapest rates in Perth

In the following video, Cam will run you through the basics on how to operate a mini excavator when you hire from Little Diggers.

What you will see:

00:20: Explains how to start the mini excavator

00:40: Explains how to engage the hydraulics on the mini excavator

00:52: Starts to explain how to operate the joysticks on the mini excavator

01:38: Explains how to track forward and back and also how to turn on the mini excavator

02:06: Explains how to slew with the foot pedal for when you are in a tight position on the mini excavator

02:30: Shows how to use the dozer/push blade on the mini excavator

02:38: You’ll see how to widen and retract the tracks in a safe manner on the mini excavator

03:48: You can see how to engage rabbit speed to track a bit faster on the mini excavator

04:08: Explains how to release the bucket safely from the hitch on the mini excavator and

Little Diggers is Perth’s premier excavator hire and bobcat hire company. We offer the best rates on all of our tight access earthmoving machinery and pride ourselves on being the most flexible and customer centric providers in the hire business.

So give Little Diggers a call for your next project to see where we can assist.

See Our Excavators For Hire